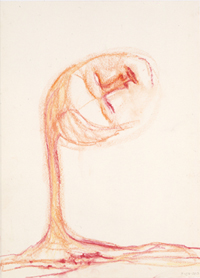 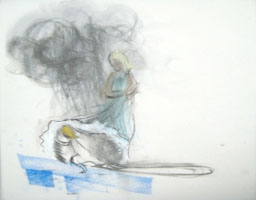 
Amal KENAWY
Born 1974 in Cairo, Egypt.  Studied fashion design at the Cairo Academy of Arts and film at the High Cinema Institute; B.F.A. in Painting, the Faculty of Fine Arts, Helwan University.  Lives and works in Cairo.  Featured in many international exhibitions in recent years, e.g., the 1st Architecture, Art and Landscape Biennial of the Canaries (Spain, 2006), the 1st Singapore Biennale (2006), Sharjah Biennial 8 (UAE, 2007), and the 2nd Moscow Biennale of Contemporary Art (2007).  Won the Grand Prix at the Sharjah Biennial.  In Japan, she has exhibited a collaborative work at Africa Remix which traveled to the Mori Museum of Art.  The present exhibition marks the first time her work has been shown in Japan under her name alone.  A new animated work titled Empty Skies—Wake Up (approx. 7 min.) will be exhibited.  (checklist) 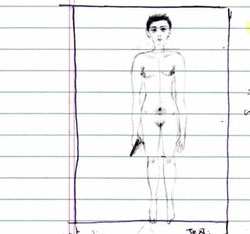 Cairo… Eating Me Inside (2007) © the artist
(not included in exhibition)


Avish KHEBREHZADEH
Born 1969 in Tehran, Iran.  Studied Mathematics at Islamic Azad University, Tehran; B.F.A. in Painting, Rome University of Fine Arts; Photography at Corcoran College of Art and Design; and Philosophy at the University of the District of Columbia.  Lives and works in Washington, D.C., USA.  Many group and international exhibitions, such as the Istanbul Biennial, Venice Biennale, and the Frieze Art Fair.  A solo exhibition held at the Museo d’Arte Contemporanea Roma (MACRO) drew attention in 2008.  The work selected for this exhibition, Backyard, is a video installation with a multilayered structure of drawing and animation.  It is part of the distinguished collection of the Honart Museum in Iran.  The present exhibition marks the first time her work has been exhibited in Japan.  (checklist) 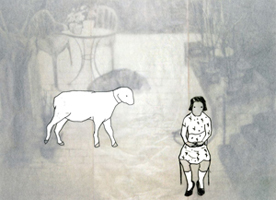 
KIM Jungwook
Born 1970 in Seoul, Korea.  B.F.A. in Oriental Painting, College of Art and Design, Duksung Women’s University.  Lives and works in Seoul.  Solo exhibition in 2006 at Gallery Skape in Seoul.  Kim is one of the most prominent artists in Korea, as witnessed by her inclusion in such exhibitions as Korean Paintings 1953–2007 at the Seoul Museum of Art (2007).
6 works (3 of which are new) selected from her portraits in Korean ink on Korean paper drawn from 2000 to 2008 will be exhibited.  The present exhibition marks the first time her work has been exhibited in Japan.  (checklist) 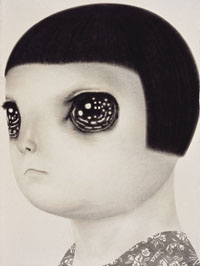 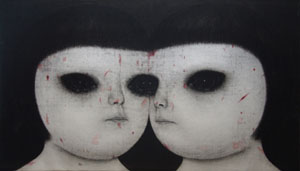 
Jose LEGASPI
Born 1959 in Manila, the Philippines.  B.S. in Zoology and M.S. in Biological Science at the University of Santo Tomas; studied in the Graduate Program at the College of Fine Arts, the University of the Philippines, Diliman.  Lives and works in Manila.  Legaspi has been included in many international and group exhibitions, such as the 4th Asia-Pacific Triennial of Contemporary Art (2002) and the Singapore Biennale (2006).  His work was first shown in Japan as part of the exhibition Under Construction (The Japan Foundation Forum, etc., 2002).
An installation of 485 drawings selected by the artist himself will be exhibited.  (checklist) 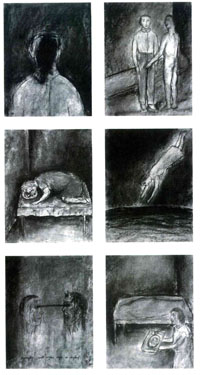 
Nalini MALANI
Born 1946 in Karachi, Pakistan.  Lives and works in Mumbai, India.  Solo exhibitions at the New Museum of Contemporary Art (New York, 2002–03), the Peabody Essex Museum (Salem, Massachusetts, 2005–06), the Irish Museum of Modern Art (Dublin, 2007), etc.  The artist not only represents India, but Asia as a whole.
2 animated works, Memory: Record/Erase (1996) and Stains (2000; created during a residency at the Fukuoka Asian Art Museum, Fukuoka, Japan), will be exhibited.  (checklist) 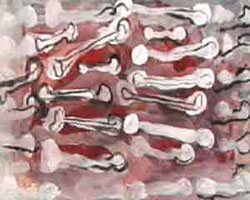 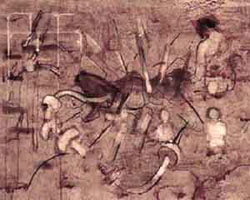 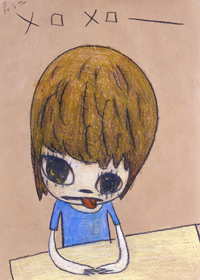 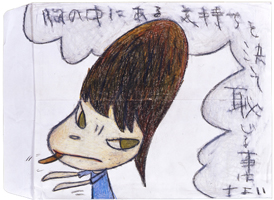 
Julião & Manuel Ocampo
Manuel Ocampo: Born 1965 in Quezon City, the Philippines.  Julião Ocampo (Manuel Ocampo’s son): Born 2000 in Berkeley, California, USA.  Live and work in Berkeley and Manila.  Manuel Ocampo has been featured in many international exhibitions, such as Documenta (1992), Biennale d’Art Contemporain de Lyon (2000), the Venice Biennale (2001), the Berlin Biennale (2001), and La Bienal Internacional de Arte Contemporáneo de Sevilla (2004).  In Japan, his work has been exhibited at the Setagaya Art Museum as that of an Asian artist residing in the United States.  An on-site installation will be shown at the present exhibition.  (checklist) 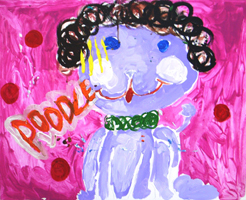 
S. Teddy D.
Born 1970 in Padang, West Sumatra, Indonesia.  Studied at Institute Seni Indonesia Surakarta and the Indonesian Institute of the Arts, Yogyakarta.  Lives in Yogyakarta, Indonesia.  Creates and presents paintings, installations, and performances, mainly in Indonesia.  Group exhibitions in Japan include AWAS! Recent Art from Indonesia (2000) and Under Construction (2002).  43 drawings have been selected for this exhibition.  (checklist) 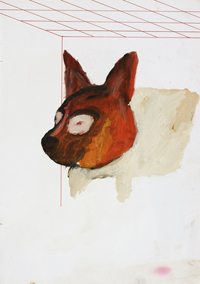 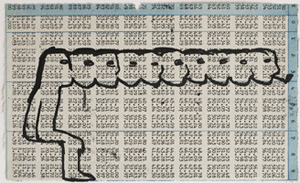 
SAKAGAMI Chiyuki
12 drawings from the 1970s to the present will be exhibited.  (checklist) 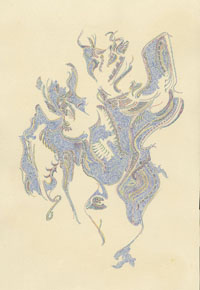 Pinaree SANPITAK
Born 1961 in Bangkok, Thailand.  B.F.A. in Visual Arts and Communication Design, School of Art and Design, University of Tsukuba, Ibaraki Prefecture, Japan.  Lives and works in Bangkok..  Known for works with female breasts and torsos as motifs.  Many international exhibitions such as the 3rd Asia–Pacific Triennial of Contemporary Art (1999).  Sanpitak has exhibited in Japan on numerous occasions, including Art in Southeast Asia 1997 Glimpses into the Future (1997) and the 2nd Fukuoka Asian Art Triennale (2002).
At the present exhibition, a large collection of her drawings from 1990 to 2008 will be displayed on a table.  (checklist) 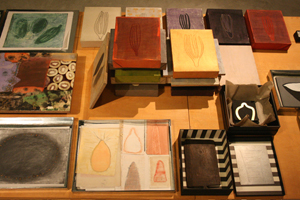 
Mithu SEN
Born 1971 in Burdwan, West Bengal, India.  B.F.A. and M.F.A. in Painting, Institute of Fine Arts, Visva-Bharati University; one-year PG Program (Visiting), Glasgow School of Art.  Lives and works in New Delhi, India.  Won the AIFACS Award in Painting (1998).  Sen has mostly exhibited her works in India in the past, but in 2006 and 2007, she held two well-received solo exhibitions at Bose Pacia in New York.
Sen will be presenting a new installation titled Nothing Lost in Translation, made with the large piece of Japanese paper she made during her residency at the Awagami Factory in Tokushima Prefecture under the Japan Foundation’s JENESYS Program.  (checklist)

It’s Good to be Queen, installation view (2006) © the artist
(not included in exhibition) 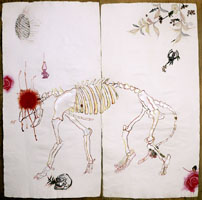 
Aditi SINGH
Born 1976 in Gauhati, Assam, India.  Studied at the International School of Painting, Drawing, and Sculpture, Montecastello di Vibio; B.A., Knox College; studied at the New York Studio School of Drawing, Painting and Sculpture; M.F.A., University of Pennsylvania.  Lives and works in Mumbai, India.
4 serene drawings of flowers and an installation of a set of 40 drawings of flocks of birds will be exhibited.  (checklist) 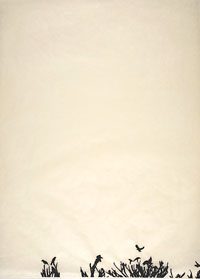 from Conference of Birds (2007) © the artist
Courtesy: Chemould Prescott Road 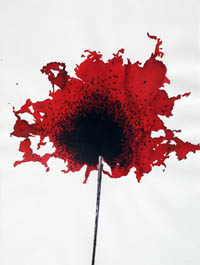 
Shooshie SULAIMAN
Born 1973 in Muar, Johor, Malaysia.  B.F.A. in Painting, the Faculty of Art and Design, MARA University of Technology.  Lives and works in Kuala Lumpur, Malaysia.  Currently in charge of an artist-run alternative space in Kuala Lumpur.  Selected for inclusion in Documenta 12 (2007).  Sulaiman regularly carries a suitcase packed with diaries full of her drawings.
16 of these diaries, including those that were exhibited at Documenta, as well as a video recording of her performance at the Tokyo venue will be shown in the present exhibition.  (checklist) 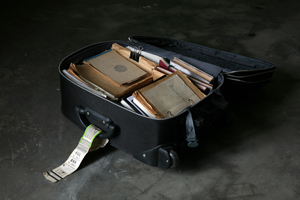 
TSUJI Naoyuki
Born 1972 in Shizuoka Prefecture, Japan.  B.F.A. in Sculpture, Tokyo Zokei University.  Lives and works in Yokohama, Japan.  In 2004, he was invited to screen A Feather Stare at the Dark at the Directors’ Fortnight program at the Cannes Film Festival.  In 2007, Children of Shadows, a work commissioned by the Aichi Arts Center, received an Honorable Mention at the Ann Arbor Film Festival.  His rapid ascent in the art world is witnessed by his inclusion in group exhibitions and screenings at such venues as Parasol Unit (London, 2007), the Yokohama Museum of Art (Animation—Adventures of Moving Pictures, 2007), and Corvi-Mora’s booth at Art Basel (2008).
2 animations made from charcoal drawings will be exhibited: Children of Shadows (approx. 18 min.) and his new work The Place, Where We Were (approx. 6 min.).  (checklist) 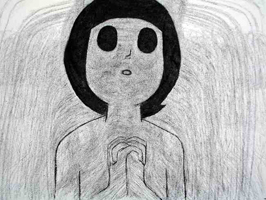 
Ugo UNTORO
Born 1970 in Purbalingga, Central Java, Indonesia.  B.F.A., Faculty of Visual Art, the Indonesian Institute of the Arts, Yogyakarta.  Lives and works in Yogyakarta, Indonesia.  In addition to creating installations and paintings, Untoro has also published art books accompanied by his own poetry.  34 drawings have been selected for the exhibition.  (checklist) 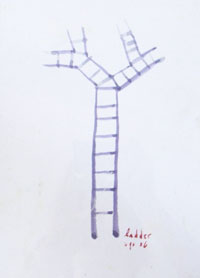 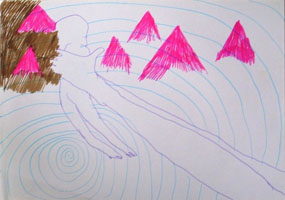