The fourth collection gallery exhibition of this year features exhibits with a variety of themes, in addition to two exhibitions entitled "Curatorial Studies 09" and "Special Feature: Modern Crafts in Kyoto."
“Curatorial Studies” is a small-scale special exhibition in which our curators present the results of their studies of specific themes in cooperation with artists and other parties, including researchers.
This time, we have focused on the textile designs of Felice "Lizzi" Ueno-Rix, who was born and worked at the Vienna Workshop (Wiener Werkstätte) in Vienna, moved to Japan with her Japanese architect husband, and played a very active role in design activities and education in Kyoto. This is a comprehensive introduction to Ueno-Rix's artwork, which was realized thanks to the kind cooperation of the Planning Department of the Osaka New Museum of Art which holds numerous works and materials related to her activities in Vienna.

Between 1998 and 2001, we held an exhibition entitled “Crafts in Kyoto” which featured the transition of crafts in Kyoto from their dawn and infancy period to the post-war and current periods when a metamorphosis of crafts occurred. This time, in the section “Special Feature: Modern Crafts in Kyoto,” we once again try to verify the diversity of modern-contemporary crafts in Kyoto by focusing on masterpieces of pottery, textiles and lacquerware.

As the last chapter of the special exhibition “Rinpa Image” being held on the third floor in the same period, “Spreading Rinpa Image” presents the collage cut-outs woodblock print, “JAZZ,” by Henri Matisse. Matisse placed "decoration/decorativeness" in the center of his art, but his concept of “decoration” was not merely “ornamental.” He believed that formative elements such as colors or lines were not subordinate to the theme of the painting, but were able to play active roles in the painting by responding to its theme. As a result, three-dimensionality is lost as an illusion, and his pictures were transformed into flat surfaces with wriggling colors and lines, then ultimately became cut-out works such as “JAZZ.” His experimental efforts are recognizable throughout his paintings, prints and illustrations. 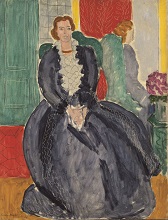 The Nihonga (Japanese-style painting) section features Ink paintings. Historically called “Nanga (the Southern school of Chinese painting)” or “Bunjin-ga (Literati painting),” these Ink paintings are created by utilizing mainly black ink as the medium of expression, even though some pale coloring might sometimes be inserted. The Nanga style was derived from the Southern Sung Dynasty paintings. The popularity of these paintings, and the high regard of the Literati spirit became widespread in Japan after the mid-Edo period, when painters such as Ike Taiga and Yosa Buson perfected the unique Japanese style of Nanga expression. In the late Edo period, it developed into one of the biggest schools of paintings in Japan, with painters such as Urakami Gyokudo and Tanomura Chikuden at the center. However, its expressions became too stereotyped, and it was ultimately rejected as an old, outdated school of painting, even being referred to by a contemptuous nickname by Okakura Tenshin in the Meiji Period. Many painters such as Tomioka Tessai, Yamaguchi Hachikushi and Mizukoshi Shonan, who are featured in this section, made great contributions to the reinstatement of the Nanga style. Their various achievements are presented in the first and second periods of the exhibition.

Tomioka Tessai,
Embarking on a Raft, 1924 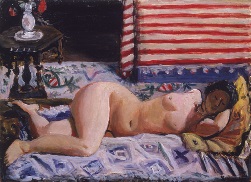 This year marks the 70th year since the end of the World WarⅡ. Numerous exhibitions related to this milestone event have been held at various Art museums. An exhibition at our museum, entitled “Artists and the War” explores how different artists have expressed their experiences during the War in their work. Robert Capa and W. Eugene Smith went to the war zone as war photographers. Works by Hamada Chimei and Kazuki Yasuo were strongly influenced by their own military experiences and detention in Siberia.
Hannah Höch, an important member of Dadaism in Germany, who was forbidden as a decadent artist from engaging in any artistic activities under the Nazi regime. Materials such as magazines and manifestos produced by the Italian avant-garde artist group “Futurism” clearly show that artistic activities, which should inherently be free, were forced to compromise in a society that was gradually covered by the air of totalitarianism, a fact of history that is indeed thought-provoking.