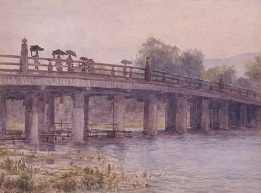 KATO Gen'nosuke, Sanjō Ōhashi Bridge, 1904
After the Meiji Restoration, as part of Japan's modernization efforts, Kobu Bijutsu Gakko (the School of Arts and Technology) was established in 1876, in order to teach skills and techniques required for western-style painting such as oil and watercolor paintings, which utilize different painting methods from traditional Japanese painting. Looking back at world history, five years after the world exposition in London (London International Exposition on Industry and Art) in 1862, the Japanese Shogunate government and Satsuma and Saga clans officially participated in the world exposition in Paris (Exposition Universelle) in 1867, triggering the popularity of Japonisme in the West. By the time of the world exposition in Vienna in 1873 (Weltausstellung 1873 Wien), a wave of enthusiasm for Japonisme had swept all over Europe, exerting a great influence in the western art scene. Followed by the change of the social structure after the Industrial Revolution, people in the West started to look for a new state of art, and eventually "adopted" Japanese art, bringing about the advent of paintings categorized as Impressionism or Aestheticism, and art nouveau designs. Such passionate examination and adoration of Japanese art in the West was also reported to Japan, generating a movement to protect traditional Japanese art and emphasize traditional art education. At the same time, it also posed the question of what the western art in Japan should be like to Japanese western-style painters.

Even though Japanese art gave inspiration to Western artists in various ways, we focus on screen composition which shows significant influence from ukiyo-e. Among all, by utilizing 4 distinctive compositions characteristic to ukiyo-e, such as "bridge," "boat," "grove," and "combing hair," we studied respective compositions in the following three cases: original ukiyo-e paintings, western paintings supposedly influenced by ukiyo-e, and Japanese western-style paintings which were supposedly influenced by "ukiyo-e" and/or "western painting."

Many Japanese western-style painters in the early period were well versed in traditional Japanese painting and its painting methods, as represented by artists such as Asai Chu. It is extremely difficult to clarify whether the "ukiyo-e" style composition in their work was derived from original ukiyo-e paintings or western paintings which were influenced by "ukiyo-e." Therefore, the relationship mentioned here is just an example.

However, how the western-style painters and Japanese artists in those days accepted and understood Japonisme gives precious insight into a problem we are facing now. In other words, how those artists at that time reacted to the "returning current of Japonisme," relates to how today's proliferation of Japanese culture abroad as represented by the phrase "Cool Japan" could influence us back here in Japan.

It would give us great pleasure if this project could become the starting point for a new, contemporary approach.