Our first collection gallery exhibition this fiscal year features numerous exhibits related to the special exhibitions entitled "Future Beauty: The Tradition of Reinvention in Japanese Fashion" being held on the 3rd floor, and "Czech Posters for Films" being held on the 4th floor.

The entrance to the venue is adorned with works by Max Ernst and Francis Picabia, which were acquired in 2013. The National Museum of Modern Art, Kyoto has had numerous Dadaist works, such as the “readymades” of Marcel Duchamp represented by his Fountain, and collage works by Hannah Höch and Kurt Schwitters. Duchamp’s sworn friend, Francis Picabia’s precious water colors and drawings from the Dadaist period, and Ernst’s oil paintings created in the transitional period from Dadaism to Surrealism have also been added to our collection. In particular, Ernst's works exerted a great influence on artists producing "Czech Posters for Films" who established fantastic, illusory styles for their posters by utilizing collage techniques. For example, a group of main figures collage of the painting The Robing of the Bride (1939) by Max Ernst was adopted in a poster for Alfred Hitchcock’s film The Birds. 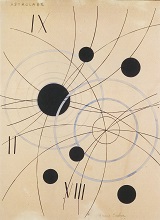 The Nihonga, Japanese style painting, section features works by Kainosho Tadaoto in commemoration of the 120th anniversary of the artist's birth. Even though Kainosho made his debut at Kokuga Sousaku Kyokai (Society for the Creation of a National Style of Painting), his decadent style of work was criticized harshly as "filthy paintings" by the prominent artist Bakusen Tsuchida. However, Kainosho's works which vividly depicted women's passion and karma took the Japanese art world by storm from the Taisho to the early Showa period, and together with the works of Okamoto Shinso, created a new art trend at that time. Furthermore, Kainosho cooperated with noted film directors such as Kinugasa Teinosuke and Mizoguchi Kenji in the field of film art and costume design, and received a nomination for the Academy Award for Best Costume Design in Kenji Mizoguchi's film entitled Ugetsu.

The Photography section introduces serial works by Tsuzuki Kyoichi, entitled Happy Victims. The photographs feature one-designer-obsessed fashion "victims" who have devoted themselves to collecting expensive designer labels, while “happily” living in their cramped living spaces, buried in heaps of clothes. His photography presents us with an expression of poignant sarcasm suggesting that these "hidden" fashion aficionados are actually the ones who have been supporting the flamboyant fashion industry in Japan.

The Craft section features textile works created both in Japan and western countries since the 1960s, ranging from simple fiber works to various dyed and woven articles and embroidery works, many of which have been enthusiastically used as one of the prominent materials for the fashion scene. New, innovative expressions of textiles, which are based on traditional techniques and styles, and their influence on the fashion industry expected to be explored in this section.

The biggest difference between men and animals is said to be the use of “clothing.” “Wearing clothes” or “being clad in fashionable attire” is an essential theme for human existence, which constantly reminds us of our own bodies as well. From this important point of view, we organized the special exhibition entitled "Visions of the Body: Fashion or Invisible Corset" in 1999, which was also co-organiszed with the Kyoto Costume Institute like as the exhibition "Future Beauty." Some of the works from this former exhibition are being displayed in this current collection gallery exhibition, such as works by Antonella Piemontese in the Craft section, and works by Pipilotti Rist and Lucy Orta in the Contemporary Art section. Piemontese's works and Orta's works critically question the direct relationship between clothes and the body. Rist's works poetically question the relationship of one's own body and life with medical settings such as childbirth and endoscopic examinations. It would be greatly appreciated if these works could set the stage for our audiences to reconsider both the significance and the questions which lie at the foundations of the concept known as "fashion."

The Yoga, western-style painting, section continues to feature selected masterpieces of our museum collection in accordance with each period. This time, works by Nanbada Tatsuoki and Inokuma Gen'ichiro, both of whom explored new abstract expressions while learning from the western trends in New York and Paris during the chaotic period of Postwar Years, as well as works by Sugai Kumi and Yamaguchi Kaoru have been selected for display.