William Kentridge (2007) What Will Come (Has Already Come) 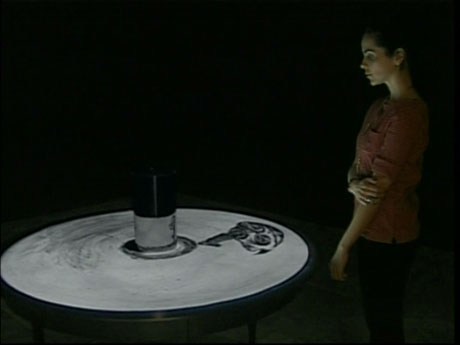 William Kentridge (b. 1955, South Africa) began creating his signature ‘drawings in motion’ in the late 1980s.  These animated works are created by photographing charcoal-and-pastel drawings with a 35mm motion picture camera, adding new marks and erasures frame by frame to make the drawings ‘move.’
Kentridge’s works are deeply affected by the history and contemporary social circumstances of South Africa, and his early works (the Soho Eckstein series), imbued with the pain inflicted by his country’s history of apartheid, have drawn a great deal of attention from all over the world as an artistic expression/practice of anti-Eurocentric postcolonial criticism.  However, a closer reading shows that, beyond their sociopolitical appearances, Kentridge’s works have consistently been engaged in the verification and storytelling of the universal and primordial issues faced by humans in the modern age: the good intentions and the collapse of an individual in his or her resistance to the status quo; the ambiguity of protection and oppression; the effort to reintegrate one’s fragmented self and the impossibility of doing so; and so on.
The artist’s persistent use of the simple technique that he himself has called “stone-age filmmaking” could also be understood as a result of his intent to seek the origins of modern narrative creation.  His unsophisticated animation technique stands in direct opposition to the contemporary mainstream of sophisticated cel and computer-generated animation.  The extremely original and powerful expression of his works, however, demonstrate that old-fashioned hand-drawn animation on paper still holds an enormous potential as an expressive medium, and his works have influenced younger generations of artists since the early 1990s.
In the late 1990s, Kentridge developed a further interest in optical devices of the eighteenth and nineteenth centuries.  He has created many intriguing works inspired by shadowgraphs, stereoscopes, camera obscuras, zoetropes, and anamorphosis, suggesting an exploration of the origins of the ‘moving image.’ 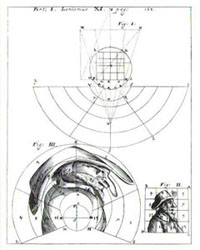 What Will Come (Has Already Come) (2007) is a work composed of a circular distorted (anamorphic) image projected from the ceiling onto a round table with a cylindrical mirror standing in the center, where the projection is reflected as an undistorted image.  One may easily imagine that the work is inspired by merry-go-rounds and cylindrical zoetropes, yet the work does not consist of the moving image produced by intermittent afterimages seen through slits as with a zoetrope.  Rather, the distorted image is reflected on a cylindrical mirror, a continuous screen on which the image rotates without interruption.
The most important aspect of the work is that the viewer must ‘see’ two different types of images in the same field of view: a pair of images with inverted meaning, that is to say, the image projected on the table (the original ‘real’ image, but distorted and therefore ‘false’) and the image corrected by the cylindrical mirror (the undistorted ‘true’ image, but actually a reflected optical illusion and therefore ‘false’).  The viewer must see and recognize each of the two images and construct a comprehensible imagined image on his or her own. 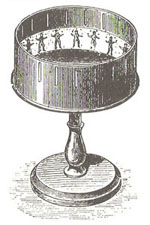 The projected image includes not only carousel ponies but a rhinoceros, a goat, a camel, an airplane, a tank, a bomb, an iris flower, a bird, and a gas mask, among others.  The audio track combines field recordings from a fairground with a popular song from Italy in the 1930s and Ethiopian music.  Given these visual and aural cues, the viewer comes to realize that the work alludes to the Italian invasion of Ethiopia in the 1930s.

It goes without saying that the theme of the work is ‘Western European intervention in Africa,’ a leitmotif in Kentridge’s works, but what is more interesting is that he is trying to convey a narrative of the origins of the moving image in twentieth-century terms through two different technological and conceptual sources.  The technical history of the motion picture is generally understood as the evolution from the camera obscura to photography, and from the consecutive projection of still images to the applied use of the effect of afterimages.  Kentridge, on the other hand, seems to be seeking out an alternate history of filmmaking that begins with shadowgraphs and the lanterna magica.  Therefore, while the traditional history of the motion picture—tracing its origins to photography (literally a record of light)—inevitably presents it as inherently ‘documentary,’ Kentridge’s alternate history is based in the projection of drawings and could be said to present the motion picture as inherently fictional instead.