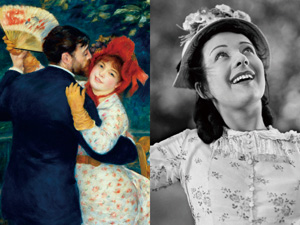 (left)  Pierre-Auguste Renoir (1882–83) Dance à la campagne (detail)
© Photo RMN/H. Lewandowski/digital file by DNPAC
(right)  Jean Renoir (1936) Partie de campagne
Paris, Collection Cinématheque française, fonds Femis; D.R.      Over the last century, there have been countless exhibitions of works by European masters of modern art.  In recent years, such exhibitions have taken new approaches in order to allow for a better understanding of the works, or to present new ways of looking at them.  Renoir + Renoir is based on a 2005 exhibition of this nature, originally held at the Cinémathèque Française and now reorganized with a Japanese audience in mind.
Renoir + Renoir presents the works of the Impressionist master Pierre-Auguste Renoir (1841–1919) alongside those of his second son and legendary film director Jean Renoir (1894–1979).  Beginning with his inclusion in the first Impressionist exhibition in 1874, Pierre-Auguste Renoir has become immortalized in the history of modern art as a leading Impressionist artist, along with Claude Monet.  His warm-colored portraits of those near and dear to him and of nudes are loved by many, and can be found in the collections of major art museums around the world.  Jean Renoir, who modeled for his father since childhood, became interested in film while nursing an injury from World War I and began working as a filmmaker in the 1920s.  His deep insight into the diversity of human nature—demonstrated in highly acclaimed works such as Grand Illusion (La Grande illusion, 1937), The Rules of the Game (La Règle du jeu, 1939), and French Cancan (1954)—strongly influenced later generations of film directors, including French New Wave pioneers François Truffaut and Jean-Luc Godard. 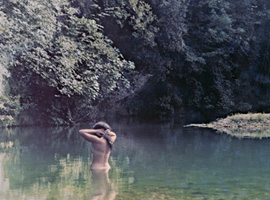 Jean Renoir (1959) Le Déjeuner sur l’herbe
© STUDIO CANAL IMAGE/tout droits réservés      Although their modes of expression differ, there are many scenes in Jean’s films that call his father’s paintings to mind.  His attachment to water, nature, and natural light as expressed on film as well as his treatment of his models suggest that Jean attained much in his creative process from his father’s works.  The present exhibition is divided into four themes in order to explore what the two men have in common: “Portraits of the Family,” “Models,” “Nature,” and “Pastimes and Social Life.”  Pierre-Auguste Renoir’s paintings and Jean Renoir’s films are exhibited in juxtaposition to one another.  This is not an attempt to demonstrate the influence of the father on the son, but rather to seek out a different way of looking at Pierre-Auguste Renoir’s works through his son and film director Jean Renoir. 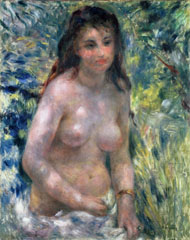 Pierre-Auguste Renoir (1875) Étude.
Torse effet de soleil (coll. Musée d’Orsay)
© Photo RMN/H. Lewandowski/digital file
by DNPAC      Photography and film were invented around the same time as the emergence of Impressionism, and became canonized as visual media of the twentieth century.  These differing modes of expression tackled the same issue: How to cut out and represent ever-changing nature and the passage of time, or how “the artist = self” views the world.  The modern approach to the relationship between the “self” and the world presented by Impressionism in the nineteenth century can be said to continue to be explored in the finest films of the twentieth century.  In this sense, Jean Renoir did not inherit motifs from his father, but rather his way of seeing itself.
The present exhibition was made possible by the full cooperation of the Musée d’Orsay.  Approximately fifty paintings from collections in Japan and overseas, including fifteen works by Pierre-Auguste Renoir in the collection of the Musée d’Orsay, will be exhibited alongside excerpts from twelve of Jean Renoir’s films that span the whole length of his career. 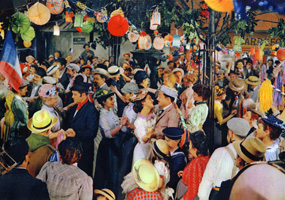 
We recommend checking the hours through the event calendar when visiting the museum during this exhibition.  (May/June/July 2008) 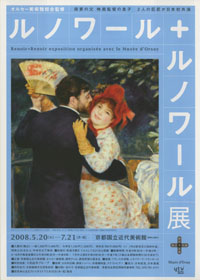 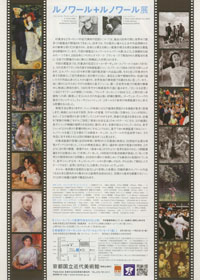