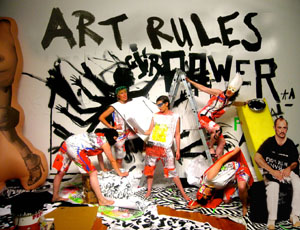 ART RULES is an ongoing performance/installation project initiated by Chicks on Speed (COS).  COS, founded by Alex Murray-Leslie and Melissa Logan in Munich, 1997, is an all-female performance group especially well-known for their cross-genre “DIY” performances.  Originally released as a pop song on COS Records with renowned artist Douglas Gordon in 2006, ART RULES has expanded into a multidisciplinary performance by seven artists (Alex Murray-Leslie and Melissa Logan of COS, Douglas Gordon, Anat Ben-David, Kathi Glas, A.L. Steiner, and Adi Nachman).  Their collaboration combines elements of punk, pop, art, video, dance, fashion, and more, blurring conventional borders in a manner typical of COS.
ART RULES has traveled to major art museums in five different countries, including the Museum of Modern Art (New York, 2006) and the Pompidou Centre (Paris, 2007).  The National Museum of Modern Art, Kyoto is the only venue scheduled in Japan. 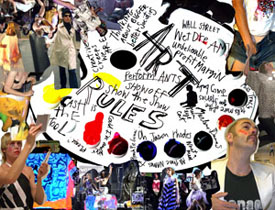 Joined by filmmaker Jane Lucy, the ART RULES Crew will produce site-specific elements for the project in Kyoto.  This new version of the project will culminate in a live performance at the museum on May 3rd.  Their collaborations with high-octane Japanese girls such as choreographer/dancer Chie Ito (artistic director, Strange Kinoko Dance Company) and avant-rock band OOIOO are not to be missed.

Details may be updated without notice. 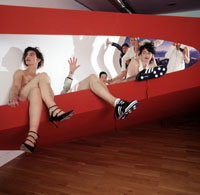 Open production + footage screening
Date: April 29 (Tue./holiday) – May 11 (Sun.)  during museum hours
Place: 1F lobby  open every day during this period, free admission
Lobby may be closed during certain hours while preparing for the performance.


Alex Murray-Leslie will be unable to come to Japan.

Organized by
The National Museum of Modern Art, Kyoto 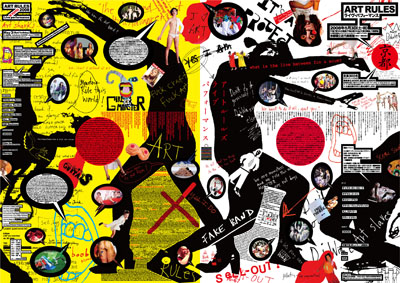