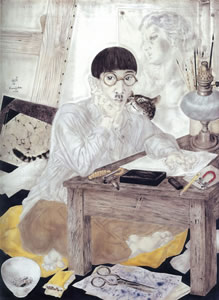 This retrospective exhibition commemorating the 120th anniversary of the birth of Tsuguharu Léonard Foujita (1866-1968) follows the entire career of the painter with 100 works, which are brought together from both within Japan as well as from countries including France and Belgium, and includes large murals and 20 works to be shown in Japan for the first time.  It covers the early period, when Foujita mingled with the painters of the Ecole de Paris and became the darling of the Paris art circle with his specialty of nudes with “milk-white skin”; the middle period, when he shifted to a representative style after returning to Japan from a trip to Central and South America, participated in the Nika-kai, and reached a peak with war paintings; and the final period, when he returned to Paris again via New York after the war, and created unique paintings with religious themes and children using thin, delicate lines.

About the “Léonard Foujita” exhibition at MOMAK


Admission
* Admission is free for visitors in junior high and younger, as well as visitors with disabilities.  Please display appropriate identification on entry.


About the “Léonard Foujita” exhibition at MOMAK
There have been, of course, a number of exhibitions in the past featuring Foujita’s works in the Kansai area alone.
For instance, the Kyoto Municipal Museum of Art held the “Hommage à Léonard Foujita” exhibition in 1968, and the Hyogo Prefectural Museum of Modern Art (the present Hyogo Prefectural Museum of Art) held the “Era of Foujita” exhibition in 1975.  Additional Foujita exhibitions were held at the Takashimaya and Daimaru department stores in Osaka, as well as the Daimaru in Kyoto.  However, while these exhibitions did feature several of Foujita’s important works, they were not retrospective exhibitions that overview the entirety of Foujita’s artistic career.
It would not be an exaggeration to say that the present exhibition, commemorating the 120th anniversary of his birth, is the long-awaited first opportunity to look back on the footsteps of Foujita’s career.
Here in Kyoto, we have selected “gold” as the base color of the exhibition.  “Gold” has been used for the exhibition sign outside of the museum, as well as the wall of the entryway of the exhibition hall.  Not only does “gold” represent “beauty” and “splendor,” it also represents “supremity”; likewise, one may call Tsuguharu Foujita the supreme modern oil painter of our country (although he was baptized in his last years as Léonard Foujita and became a French citizen).
In the Kyoto portion of the present exhibition, 92 oil paintings and watercolors will be shown.  Of these works, approximately thirty are from other countries such as France and Belgium, and approximately twenty works have never been shown to the public.  This is the very first retrospective of such a massive scope, encompassing the whole of Foujita’s life as an artist.
Additionally, in Kyoto, the Collection Gallery (4F) will feature a Special Theme exhibition entitled “Tsuguharu Foujita and the Painters of the Kyūshitsu-kai of Nika-kai” during the Foujita exhibition, as well as oil paintings, watercolors, and photography with the theme of “Paris—Japan” from June 6 (Tue.) onward.


Notice
The following works will not be shown in Kyoto:

The following watercolors will be shown for half of the exhibition period due to the fragile nature of the works: 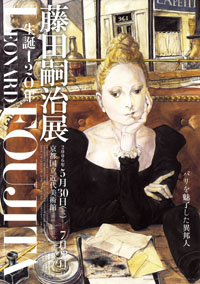 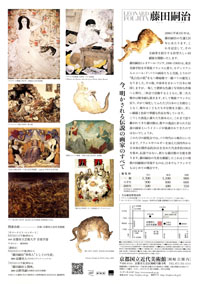 In order to view these files, you will need the Adobe® Acrobat® Reader™, a plugin available from Adobe Systems, Inc.  Adobe Acrobat Reader can be downloaded for free on the Adobe website.