Japan has a four-season climate, and Japanese of ancient times loved, wrote about, composed poems about and painted the distinct beauty of each season. In the Nihonga (modern Japanese-style painting) area of this Collection Gallery Exhibition, we are pleased to exhibit works depicting various aspects of winter.

Perhaps there is no more wintry sight than a stand of leafless trees. Takeuchi Seiho's Willow Trees on the Frosty Riverside depicts willows along a riverbank in the morning frost, and features the fascinating silhouettes of thick trunks and slender branches rendered in strokes of varying thickness. Two sparrows snuggling together convey the cold while a single water wagtail elegantly perched on a branch expresses the purity of the clear air. Meanwhile, Komatsu Hitoshi's The River Mogami in Snow depicts a grove of trees blanketed in snow and their reflections in the surface of the Mogami, which must be cold, but are full of a mysteriously warm energy due to their powerful yet precisely detailed rendering in viscous ink with high nikawa glue content. Komatsu was originally from Yamagata Prefecture in northern Japan and was based in Ohara, one of the snowiest areas of Kyoto, and this familiarity with the cold influenced his unique sensibility.

When it comes to winter we cannot forget the familiar sights of the New Year's holiday. To mark the first celebration of a new year since the Reiwa Era began with the coronation of Japan's new Emperor, a work depicting Jurojin and Daikokuten, two of the Seven Gods of Good Fortune, is on display. At Daikokuten's feet is a mouse, this year's animal of the Chinese zodiac. New Year's is a time when many people wear kimono, including kimono with splendid red and white plum patterns, to visit shrines for the first prayers of the new year, play shuttlecock, fly kites, and play traditional handball games. Others may wear padded sleeveless jackets over their kimono or sweaters underneath against the bitter cold while playing dice or card games at home. Traditional Japanese apparel and leisure pastimes have long been reserved almost exclusively for the New Year, but they are precious traditions to be preserved into the future.

Trends in Contemporary Japanese Painting, or Trends in Contemporary Japanese Art, was a series of exhibitions focusing on new trends in art of the era that was held annually at the National Museum of Modern Art, Kyoto from 1963, the year the facility was founded, until 1970. The 1960s was a period of great conceptual and stylistic change in art. And these nine shows were intended to "collectively shed light on a cross-section of trends in order to grasp some of the new aspects of the contemporary art world, which has displayed a multitude of changes and myriad forms." Focusing on "key figures who have made noteworthy works in the past year, and the works of rising artists," the series strove to introduce cutting-edge expressions, which at the time was a highly innovative approach for a Japanese museum. Looking back at the exhibitions, we find a host of works that subsequently came to be seen as major works in the artists' careers.

In this small exhibit, titled Reconsidering the Trends in Contemporary Japanese Art Exhibition (1966–1970), we draw on works from the museum collection to reexamine this nine-part series. From 2010 to 2013, we featured the first four exhibitions, and for this installment, we have assembled pieces from the remaining five shows, held between 1966 and 1970. The works from this four-year period stray from traditional genre divisions such as painting and sculpture. Instead, there are two- and three-dimensional works that question the reality of vision, works that make use of industrial products, device-like works that incorporate light, sound, and movement, works that transform the space through the placement of natural materials, and performance works. Here, we see a variety of developments that later became the mainstream of contemporary art. Although there are only a few of the actual works that appeared in the exhibition series, we hope that you will enjoy looking at these examples of contemporary art from the '60s and '70s, which the museum explored and pursued, in tandem with archival documents such as records and photographs related to the works.

From the works shown here, it may not be easy to imagine the tremendous fervor of those days, but these products of the Italian cultural environment remain both appealing and important in terms of contextualizing Japanese ceramics in the wider world of ceramic art. For example, take something as basic as clay, the origin of all ceramics. Due to soil quality, Asian and European clays differ, and in Italy the dominant genres have been low-temperature-fired terracotta and majolica. The works of highly acclaimed ceramicist Leoncillo Leonardi and of Lucio Fontana, also a famous painter, are terracotta. In contrast to these traditional methods, Carlo Zauli achieved a unique white using a high-temperature firing process, while Guerrino Tramonti established a distinctively colorful vision by incorporating techniques such as glazes that change color during firing. Meanwhile, the unfortunately short-lived Alfonso Leoni produced constructivist ceramic works in the majolica genre, while Hirai Tomo, who studied under both Nino Caruso and Carlo Zauli, the two giants of contemporary Italian ceramics, explores contemporary interpretations of majolica by introducing a Japanese decorative sensibility into works with a Mediterranean brightness. Also, Federico Bonaldi deals comically with folk motifs and has emerged as one of the most prominent contemporary Italian ceramic artists.

The Kawakatsu Collection, which includes a grand-prize winning piece from the 1937 Paris International Exposition, constitutes the most substantial public collection of Kawai Kanjiro's works in terms of both quality and quantity.

The collection was donated to the museum by the businessman Kawakatsu Kenichi in 1968. When a museum curator went to see Kawakatsu's huge collection of Kawai's works, which placed an entire space of his house, he said, "Choose as many as you like." In the end, 415 items were selected. Along with three pieces that Kawakatsu had previously donated to the museum and seven others that were subsequently added to address a lack of Kawai's early works, the collection eventually totaled 425 works. Made up of important works by the artist, stretching from his first efforts, which were modeled on Chinese porcelain, to his final pieces, made after his involvement with the Mingei movement, the collection is truly a chronological encyclopedia of Kawai's ceramics that spans his entire career.

Kawakatsu (1892-1979), who assembled the collection, worked as the advertising manager at the Tokyo branch of Takashimaya Department Store as well as serving as the store's general manager, and the senior managing director of the Yokohama branch. In his role as a member of the Ministry of Commerce and Industry's craft examination committee, he also strove to foster craft designs.

Kawai's long friendship with Kawakatsu began when he went to meet the artist at the station when Kawai traveled to Tokyo for a meeting regarding the 1st Creative Ceramics Exhibition, which was held at Takashimaya in 1921. Immediately sensing that they were kindred spirits, Kawakatsu began collecting Kawai's works. Reminiscing about the collection, Kawakatsu said, "It wasn't merely based on my personal taste. Sometimes Kawai would make works for the collection and he also chose lots of pieces for it." He added, "It was the crystallization of our friendship." 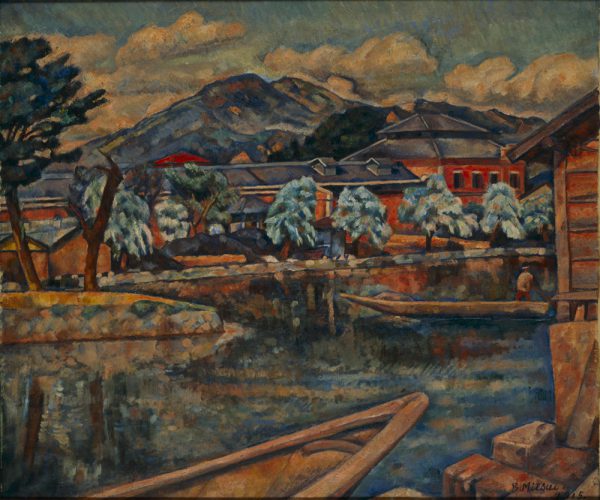 The ceramics of Nino Caruso sometimes feature forms evoking ancient structures. More generally speaking, architecture as one of humanity's fundamental activities has frequently appeared in paintings and decorative arts since time immemorial. This is also true in Japan, where as long ago as the prehistoric Jomon Period there were stone objects shaped like dwellings. During the ensuing Yayoi Period (c. 1000 BC – c. 300 AD) earthenware and bronze bells were carved with architectural patterns, and Kofun Period (c. 250 – c. 600) haniwa (unglazed terracotta objects) included those in the form of houses. Thereafter, from ancient to early modern times, buildings and other structures have appeared in many different genres including Buddhist painting, narrative painting, landscape, and panoramic urban scenes.

In modern and contemporary painting, and particularly Western-style painting (oil and watercolor), it has become common practice to make structures themselves the subjects of works, eliminating more traditional elements of genre painting. In Japan, this evidently began with landscapes featuring famous sites intended for sale to foreign audiences, but eventually painters emerged who turned their gaze fully on buildings and cityscapes as they would the subjects of still lifes or portraits. These painters' ambition was stirred by the appearance of modern scenery containing train stations, dams, elevated highways, bridges and other products of modern engineering.

Here, focusing on modern Japanese painting, we present a variety of works from the museum's collection featuring a wide range of structures. We invite you to experience a diverse array of works, from paintings with narrative elements to works purely concerned with buildings themselves, works that seek to symbolize the depths of space and time through architecture, those depicting the buildings and cityscapes of foreign lands, and those capturing the new landscapes of the modern era.

Night Discount for Collection Gallery Adult: 220 yen
University students: 70 yen
*The Discounted admission is only available after 5 P.M. on Fridays and Saturdays
*Admission until 30 minutes before closing.

Back to Top of Collection Gallery