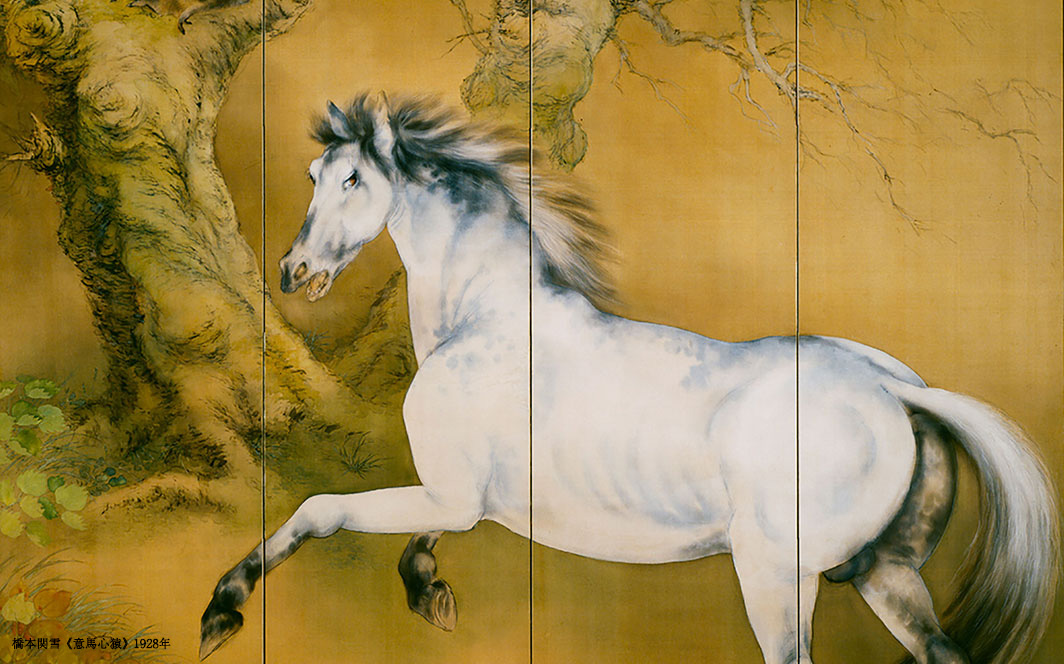 Lineage of the Maruyama-Shijo School: from the Modern Kyoto Painting Circle

In the 18th century, a spirit of empiricism flourished under the influence of rangaku (lit. "Dutch studies," the study of European science, medicine and so forth), and culturally refined Kyoto dwellers grew dissatisfied with the works of the Kano School, goyo-eshi (official painters) that modeled their art on that of the past. They sought painters who depicted the beauty they saw unfolding before their eyes, of seasonal landscapes and vegetation, the dynamism and charms of animals, the glamour and beauty of women. Just then there emerged Maruyama Okyo, a painter who did just that, using a newly developed approach based on closely studied sketches from life and employing perspectival rendering. His paintings of "things as he saw them" could at times be seen as too cut and dried, but as a counterbalance there emerged the Shijo School, founded by Matsumura Goshun, which incorporated poetic, literary, and emotional elements. Synergy between the two brought the Kyoto art world to new heights. Eventually, as the Meiji Era (1868-1912) dawned and the national capital was transferred to Tokyo, Kyoto's vitality fell into decline with the departure of aristocrats, followed by prominent townspeople, and the ravaging of the city by the Boshin War (civil war between Imperial and Shogunate forces, 1868-1869). In place of the Kyoto painters' output, literati painting, Tokyo-based artists' works, and oil painting flourished, and the Kyoto art scene appeared moribund. However, local business leaders flush with prosperity thanks to modern industry emerged as a new class of patrons, pumping new life into the city and commissioning paintings. New painters carrying on the legacy of the Maruyama-Shijo School appeared, including Takeuchi Seiho, Yamamoto Shunkyo, and Uemura Shoen, and at the first government-sponsored national exhibition in 1907, the Kyoto contingent showed themselves quite equal to their Tokyo counterparts and the modern Kyoto art scene subsequently thrived.

In this area, we follow up on the special exhibition Legendary Kyoto Painting from Maruyama Okyo to the Modern Era on the third floor by presenting works by modern Kyoto painters that form the core of the museum's Nihonga (modern Japanese-style painting) collection. If you have just viewed that exhibition, we realize you may be a bit worn out, but this is a rare opportunity to trace the progress of Kyoto painting from the early modern to the modern era by viewing works in person, and not to be missed!

Read More
The Photographs of Nojima Yasuzo: 130th Anniversary of His Birth

When people see an exquisitely rendered realist painting, they often say it "looks just like a photograph." But what do you imagine when you hear of a "photograph that looks like a painting"? Nojima Yasuzo (a.k.a. Hiromasa, 1889-1964) was a photographer whose oeuvre contains numerous photographs that intentionally evoke paintings.

Known as art photography or pictorialism, this style became popular among Japanese amateur photographers in the Meiji (1868-1912) and Taisho (1912-1926) eras, but came to be criticized as a mere imitation of painting, and subsequently fell into rapid decline under the influence of the shinko shashin (new photography) movement, which pursued "straight photography" through the "mechanical eye" of the lens, and the rise of photo journalism during the World War II years.

Nojima himself said photographers "should not be happy just because someone says your work looks like a painting," but his own photographs employing the pigment printing process indeed show a painterly vision, dense and deep with a unique sense of texture. One could point to similarities with painters like Kishida Ryusei, a friend of Nojima's, in his nudes, still lifes, and other works that capture his subjects with compelling realism.

Around 1930 Nojima was strongly impressed with new trends in German photography, and his style took a drastic turn toward boldly cropped gelatin silver prints as he pursued modes of expression unique to the medium of photography. He showed new possibilities for the presentation of photographs in the photography magazine Koga (Light Pictures), which he co-founded in 1932 with fellow photographers Nakayama Iwata and Kimura Ihei, and the radical installation by designer Hara Hiromu of his solo exhibition The Female Face – 20 Works at Kinokuniya Gallery in Ginza.

In this special exhibit we are pleased to present a range of Nojima's work from his early works pushing the limits of pictorialism, to the Model F series recognized as the pinnacle of his nude photographs, to his The Female Face series capturing "modern girls" (liberated young Japanese women of the era between the world wars) in shots with dramatic contrasts of light and shadow. We invite you to trace the arc of Nojima's work, which throughout his career consistently grappled with the fundamental question: "What is photography?"

The phrase kachofugetsu ("flowers, birds, wind, moon") encapsulates the beauty of nature, and is used when describing Japanese people's love for nature and its phenomena. Since ancient times, the people of Japan have responded to natural beauty around them, and have decorated objects used in daily life with motifs derived from nature. The scientist Edward S. Morse, one of many visitors from overseas at the close of the Edo Period (1603-1868) and in the Meiji Era (1868-1912), wrote "I see a hundred times as many people in this country enjoying beautiful cloud effects, lotus blooming, the parks and gardens, as I do at home," and the physician and scientist Philipp Franz von Siebold stated that "for the Japanese, poetry and a love of flowers are as inseparable as two wheels on a single cart." Many other non-Japanese visitors had similar impressions, and noted that the Japanese perceive nature not in terms of untamed wilderness, but as a gestalt comprising various meanings tied to their civilization and culture, and that all manner of everyday objects convey the sense of a microcosm of nature in which people and other living things interact. In particular, this is true of crafts that people employ in their daily lives, and images of flowers, birds, wind, moon and the like illustrate relationships between people and nature in diverse ways through a variety of materials, techniques and decorative motifs. This applies to craft works by individual artists as well, and there are many examples of the beauty of plants' structures being captured in sketches and applied in the modeling of materials.

In this area, we present modern Japanese crafts with kachofugetsu themes, including works from the Meiji Era that the museum has acquired over the past few years.

The Maruyama-Shijo School was a seminal force in the development of early modern Japanese painting. Its members focused on observing actual objects closely and rendering them from life, while learning from the realism of Qing Dynasty (1636-1912) Chinese and Western painting. However, it must be recognized they were not solely devoted to realism, but also incorporated influences such as the brushwork of Kano School ink wash painting and the decorative qualities of the Rinpa School, creating a distinctive style that was widely admired, especially in Kyoto.

The history of Yoga (oil and watercolor painting) in Japan is surprisingly similar to that of the Maruyama-Shijo School. Yoga emerged in the late Edo Period (1603-1868), when artists were stunned by the realism of Western painting and began studying it. It seems that before they were able to explore this realism thoroughly and grasp its true essence, they got caught up in simply following new trends in Western art that appeared one after another, but this process can also be viewed as one of endeavoring to transform Yoga, which was supposed to be "Western-style painting," into something intrinsically Japanese. Yoga's history can be seen as a search for a style unique to Japan, learning from but also deviating from Western realism, and moving towards flatness, abstraction, and above all the decorative.

What were the results of this endeavor, which advanced so rapidly over a short period of time in the modern era? You can see them here, in these works from the museum's collection.

Themes of Exhibition Lineage of the Maruyama-Shijo School: from the Modern Kyoto Painting Circle
The Photographs of Nojima Yasuzo: 130th Anniversary of His Birth
Kachofugetsu in Modern Crafts
Japanese Western-Style Painting and the Decorative
[Outside] Outdoor Sculptures