The National Museum of Modern Art, Kyoto has often focused on the work of Murakami Kagaku, featuring him as the first modern Nihonga painter, and holding a major retrospective in 2005. This year, 80 years have passed since the artist's death in November 1939, and we are pleased to mark it with a special commemorative exhibition.

After graduating from the Kyoto City School of Arts and Crafts, Murakami enrolled in 1909 at the newly established Kyoto City Art College (present-day Kyoto City University of Arts). At both institutions he studied the Maruyama Shijo School of painting, incorporated elements of ukiyo-e, Nanga or Southern School (Japanese painting inspired by Chinese literati painting), and Western painting, and frequently exhibited and won prizes at the Bunten Exhibition organized by the Ministry of Education. However, he and the artists Irie Hako, Sakakibara Shiho, Tsuchida Bakusen, Ono Chikkyo, and Nonagase Banka, whom he had gotten to know at the two schools, became dissatisfied with the criteria employed by the Bunten, the only place they were able to exhibit, and in 1918 they formed the Kokuga Sosaku Kyokai (Society for the Creation of a National Painting Style), seeking opportunities to create and exhibit work freely and establishing their own series of exhibitions known as the Kokuten.

However, Murakami had always harbored the idea that the art-world establishment itself constrained artists' freedom and rendered their activities impure, and he was also suffering from worsening chronic asthma. For these reasons, after exhibiting in the 5th Kokuten in 1926, he withdrew from the art scene and the following year moved to Hanakuma, Kobe where his family home was located. There, while living the life of a recluse, he continued producing art in a manner similar to religious training, having come to believe, as embodied by his famous quote "Art is prayer behind closed doors," that painting was a means of grasping the essence of the world and understanding the ultimate truths of the cosmos. His primary subjects – Buddhist imagery, Mt. Rokko, peonies and camellia – were mainly rendered in sumi ink, but the paintings were not completely monochromatic. They may appear at first to be executed in ink alone, but take time and look at them from different angles, and in areas that appear to be blank paper, there is actually chalk-white pigment, or subtle shades of turquoise, vermilion, burnt sienna or yellow ocher, or touches of gold, silver, and aluminum paint applied, understated accents that delight the eye and the heart.

This special exhibition features, in addition to 20 works from the collection and about 50 entrusted to the museum, various materials related to Murakami, as well as the master sketches for a major work by his close associate Irie Hako, which were recently restored. The first term of the exhibition (April 26–June 9) will focus on works from the Kyoto City Art College through the Kokuten era, and the second half (June 12–August 4) primarily on works from his years of seclusion in Hanakuma. This two-part exhibition will enable viewers to immerse themselves fully in the marvelous world of Murakami's art. 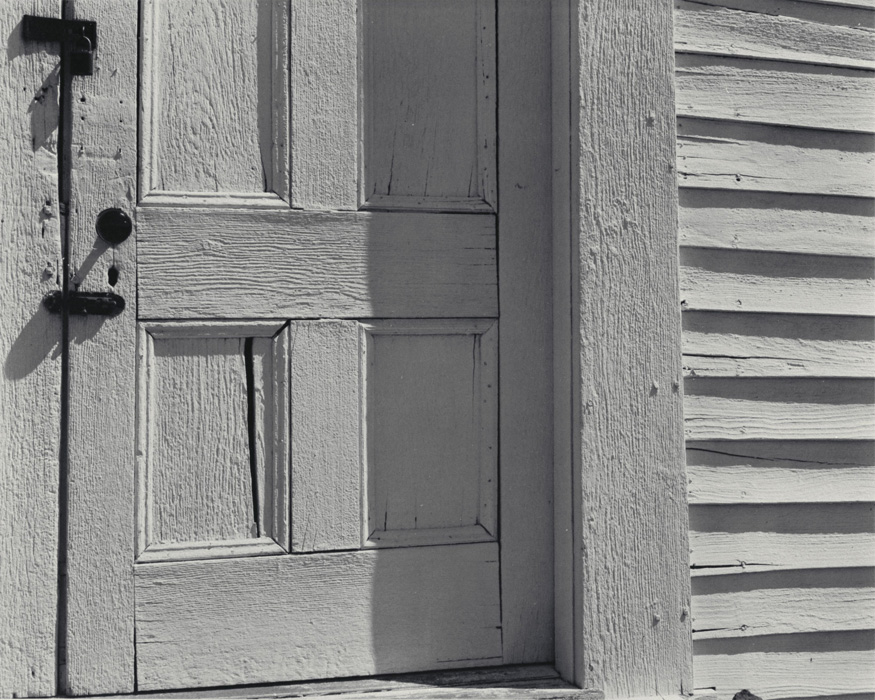 Photography, a technique that was invented approximately 200 years ago in Europe, was first established as a form of artistic expression in 20th-century America.

Early in the century, Alfred Stieglitz, known as the "Father of Modern Photography," advocated the concept of "straight photography" as a means of pursuing expressions that were unique to the medium by making the most of the camera and the lens. In 1902, the German-born Stieglitz joined forces with Edward Steichen and others in New York to form the Photo-Secession. The group published a magazine called Camera Work and contributed to the spread of photography as art. The final issue of the magazine, published in 1917, included a feature on the up-and-coming photographer Paul Strand, and his pictures of everyday New York scenes, which were cut out to create innovative compositions, pointed to a new direction in photographic expression.

Around the end of World War II, Aaron Siskind and Harry Callahan were invited to teach at a school (informally known as the New Bauhaus) founded in Chicago by László Moholy-Nagy, a former Bauhaus professor who had emigrated to the U.S. The photographers offered classes such as light workshops, leading to the birth of many unique experimental photographers.

The museum's photographic holdings can be traced back to the Kyocera Corporation's 1986 gift of the Gilbert Collection, totaling some 1,050 items. These works were amassed by a Chicago couple named Arnold and Temmie Gilbert between the late 1960s to the 1980s.

The collection is distinguished by the fact that it presents a comprehensive picture of photographic history, and by the large number of rare original prints, reflecting the Gilberts' close relationship with many legends of modern American photography. In this exhibit, we present a selection of works by ten of these artists.

The Mingei (Folk Art) movement, which began in the early 20th century, remains strongly influential in Japan today amid renewed recognition of values and activities rooted in the rhythms of everyday life. The movement is distinguished by its members' veneration of the wholesome beauty of everyday utensils (vernacular crafts) created by anonymous artisans, and formulation of a descriptive vocabulary for these items' properties, creating a narrative distinct from the mainstream of modern fine art.

The Mingei movement began in 1926 when Kawai Kanjiro, Tomimoto Kenkichi, Hamada Shoji and Yanagi Soetsu printed and distributed the "Prospectus on Establishment of the Japan Folk Crafts Museum" under their joint names. Artists involved in Mingei established a unique aesthetic sensibility by deepening their understanding of Western modern art concepts of artists' individuality and originality, while also studying the works of anonymous artisans.

The ideas of Mingei resonated widely, and many who went on to become highly prominent figures in Japanese modern art, such as printmaker Munakata Shiko, stencil dyeing artist Serizawa Keisuke and wood and lacquer artist Kuroda Tatsuaki, became members of the group. Munakata's talent had already been recognized by Yanagi and others in the Kokuga Sosaku Kyokai (Society for the Creation of a National Painting Style), and he became a key member of the Mingei movement. While involved with Mingei, Serizawa's encounter with Okinawan Bingata (traditional resist-dyed textiles made with stencils and other methods) shaped his development of a unique stencil dyeing style, and Kuroda was strongly influenced by Joseon Dynasty Korean woodwork. As creators who maintained close interpersonal relationships while pursuing their own paths in art, the members formed a community that mutually reinforced their individual creative endeavors. Here, in conjunction with Potter Kawai Kanjiro: Works from the Kawakatsu Collection, an exhibition that also marks the 140th anniversary of the Kyoto Shimbun newspaper's establishment, we are pleased to present 23 works from the museum's collection by these three artists who played central roles in the Mingei movement.

Ota Kijiro (1883–1951) was a Japanese Western-style painter who was born in Kyoto and spent his final days here. He studied at Tokyo School of Fine Arts (today the Faculty of Fine Arts at Tokyo University of the Arts), and after graduation studied abroad in Belgium, where he is known for mastering the pointillist techniques of the Belgian Impressionists.

It is not entirely clear why Ota chose to study in Belgium when so many of his fellow art school graduates went to France, but he may have done so on the recommendation of Kuroda Seiki, a mentor to Ota at Tokyo School of Fine Arts. For four and a half years starting in 1908, Ota studied under the renowned Belgian Impressionist Emile Claus.

While Kuroda Seiki introduced to Japan an academic style incorporating Impressionism-like handling of light, his student Ota can be viewed as a purer proponent of Impressionism itself, exploring its possibilities through refinement of pointillist techniques.

The paintings from the museum's collection on view here, from his stay in Europe and after his return to Japan, are wonderful examples of Ota's approach to observation of nature and depiction of light. Right now at The Museum of Kyoto, the exhibition Ota Kijiro and Fujii Koji is on view, so please take the opportunity to enjoy it as well.

In addition to large public events such as the 1964 Tokyo Olympics and the 1970 Osaka Expo, the '60s and '70s saw a printmaking boom. Along with ukiyo-e and original woodcuts, which had existed prior to World War II, a diverse range of printing techniques emerged during this period. These included silk-screen printing, based on printing and a photomechanical process; lithography, which makes use of simple forms and planes of color; and elaborate copperplate engraving. These and related fields, such as graphic design, influenced each other, and biennales and other international exhibitions earned Japanese print artists a great deal of attention.

These included Ikeda Masuo and Ay-o, and Isobe Yukihisa who had both been involved in the Kansai-based Democratic Art Association; Yoshihara Hideo, who had started a printing class at Kyoto City University of Arts; Yokoo Tadanori, who was primarily active as a graphic designer; Kurosaki Akira, who created contemporary works rooted in traditional ukiyo-e; and Yoshida Katsuro, Noda Tetsuya, Kimura Kosuke, and Komura Hideki, who incorporated photography into their work.

The artists used the techniques and visual vocabulary of printing to underscore the unique charm of the form, which at the time had come to seem like an old-fashioned approach. The idea of utilizing a plate as a medium to reject handwork and eliminate physicality, the use of photographs and printed images, and the conceptual notion of the relationship between reality and representation shared an awareness with other art movements of the period.

Ida Shoichi, who made his debut during this period, continually explored new printing concepts throughout his life. Born in 1941 in Kyoto, Ida began making prints in the mid-'60s while enrolled in the Western Painting Department at Kyoto City University of Arts. Championing the idea that the "surface is between," Ida's work validated the concept of printing. In this special exhibit, we introduce multiple examples of Ida's challenging approach to the medium. These include brilliantly colored lithographs and silkscreen prints, comprised of concise forms and planes of color, which date from the start of Ida's career and display the influence of Marcel Duchamp and Andy Warhol. There is also a pioneering installation, using wallpaper, and works based on a dialogue with natural materials, which recalls Mono-ha and other contemporary art movements of the era, as well as some experimental pieces, which employ a diverse range of materials as printing plates.