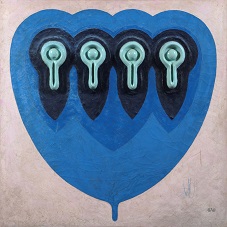 The Blue Tulip (1964）
Yoshida Minoru is also an artist worthy of special mention in that he played an important role not only in the Kansai region, but also in the post war avant-garde art history of Japan.
Especially, there is accelerating momentum in reevaluating Yoshida's abstract paintings from the 1960s in the world, against a backdrop of increasing interest in Japanese avant-garde art history both in Japan and abroad, as well as a retrospective of the Gutai collective held at the Guggenheim Museum in New York in 2013.
Even though many of Yoshida’s abstract paintings fortunately remain unscathed, there has been little chance to present all of them together at one time.
As a museum which has had a deep relationship with Yoshida Minoru, who was a resident of Kyoto (Yoshida submitted his works to our exhibitions entitled "Trends in Contemporary Art in Japan" held in 1964 and 1967 respectively), this exhibition has been organized in order to respond to accelerating interest in his works, and to present both the results of our detailed research regarding his relatively unknown abstract works from the 1960s, and related reference materials.
Through Yoshida Minoru's abstract paintings in 1960s, we would like to once again shed light on the supreme sensitivity and skills of this artist, not only as a member of the Gutai collective, but also as an individual artist who continued to bravely stand face to face with a changing world even after the Gutai's dissolution. Furthermore, we would like to take this as a special opportunity to reevaluate Yoshida Minoru, who took the kaleidoscopic changes in art styles of the 1960s as an expression and response of the people toward such a tumultuous period, when not only society and politics, but also people's living environment and sense of values were undergoing tremendous change. 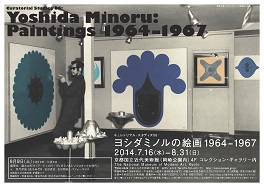